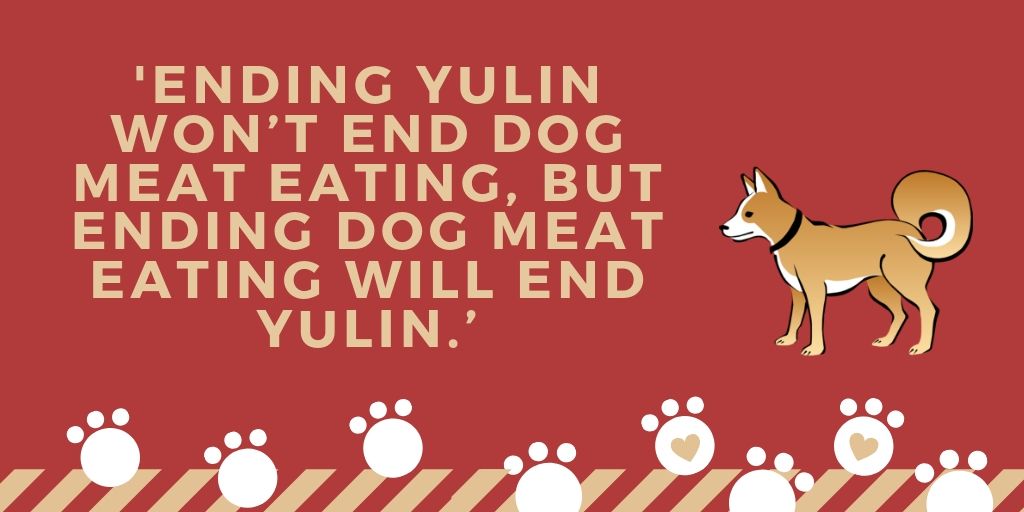 China’s most notorious festival, the Yulin Dog Meat and Lychee Wine Festival, is set to begin once again this summer solstice, 21st June, despite national objections and international protests.

The Yulin Dog Meat Festival, which was established in 2010 by dog meat traders in Guangxi  province, has been condemned nationally and internationally by animal rights groups, NGOs and dog lovers who argue that the treatment and slaughter of dogs in Yulin is completely inhumane .

Outrage at the Yulin Dog Festival reached its zenith in 2013 and 2014 when the slaughtering of dogs in the streets was widely reported. The outcry from animal rights groups, which was backed by celebrities and public figures including Cameron Diaz, Ricky Grevais, Simon Cowell, Matt Damon and Joaquin Phoenix, brought the festival into the international spotlight and as a result some of the festival’s most barbaric practices have since been curtailed. The public slaughter of dogs is now banned and the Yulin’s slaughterhouses have been moved away from the city centre.
https://www.youtube.com/embed/8j63GyPCWkE

The Yulin Municipal Government has since withdrawn its public support for the dog meat festival, and although it continues each year, it now does so as an unofficial event. In 2016, local officials attempted to bring an end to the unofficial festival once and for all, but they were met by heavy local opposition, primarily from dog meat traders whose profits soar during the 10 day festival.

The consumption of dog meat in China is legal but the dog meat industry accounts for only a small fraction of the country’s food industries . Dog meat consumption is not actually part of China’s mainstream food culture, and the majority of Chinese citizens do not eat dog meat, contrary to headlines in some western tabloids which are determined to portray China as a nation of dog eaters.

The growth in negative attitudes towards dog meat consumption reflects China’s growing affection for pets , with dog and cat ownership now common among middle class families. Young Chinese urbanites are largely against the consumption of dog meat and many netizens use social media to voice their disgust of the country’s dog meat festival. In Shanghai a prominent art gallery is currently hosting an exhibition protesting dog meat festivals, with its central exhibit a skeleton reassembled from dog bones collected from Yulin. Visitors to the gallery are asked to show their objections to the festival by signing a petition calling for the cancellation of the Yulin dog meat festival.

Sadly, despite changing attitudes, over 15,000 dogs will still be slaughtered in Yulin this year during the ten day festival, as locals and visiting ‘dog meat enthusiasts’ continue to consume dog meat.

Alongside the inhumane butchering of Yulin’s dogs, another factor which concerns dog lovers and animal rights groups is the evidence that the dogs which are slaughtered for the Yulin festival are often stolen pets. According to a new report published by Animals Asia , most of the dogs slaughtered in Yulin are not “farmed” .

‘The vast majority are stolen companions or strays. Grabbed or poisoned or both and crammed into tiny cages with other dogs – they start a long journey to a dog meat trader. During this time they have no food or water and diseases spread quickly’

There is optimism that China’s dog meat industry will eventually be shut down, but for animal lovers that won’t happen soon enough. Currently, China’s dog meat butchers and traders are among the country’s least uneducated, and most disadvantaged of the workforce. If the government outlaws the sale and consumption of dog meat, they will need to provide those currently working in the industry with training and opportunities to seek alternative employment.

Some dog lovers who visit Yulin have bought dogs from dog meat traders to rescue these animals, and while this is indeed admirable it is not the solution.

In 2017, over 100 Chinese animal charities wrote an open letter asking dog lovers not to rescue dogs in this manner. The dog meat industry works on the premise of supply and demand. Dog meat traders who sell a dog to rescuers will soon replace their “stock”, often by picking a stray from the streets or stealing a family pet.

‘Buying dogs from the highlighted areas boosts the local industry and leads to more innocent deaths while also helping local traders make higher profit. It can even breed unsupervised so-called animal activists with ulterior motives. We firmly say NO to this!’

If you wish to help bring the consumption of dog meat to an end, please get in touch with Animals Asia, or other animal rights organisations which are petitioning authorities in China, Korea, Vietnam and Indonesia to bring a swift end to the year-round trade in dog meat which is ‘rife with abhorrent cruelty and blatant illegality.’