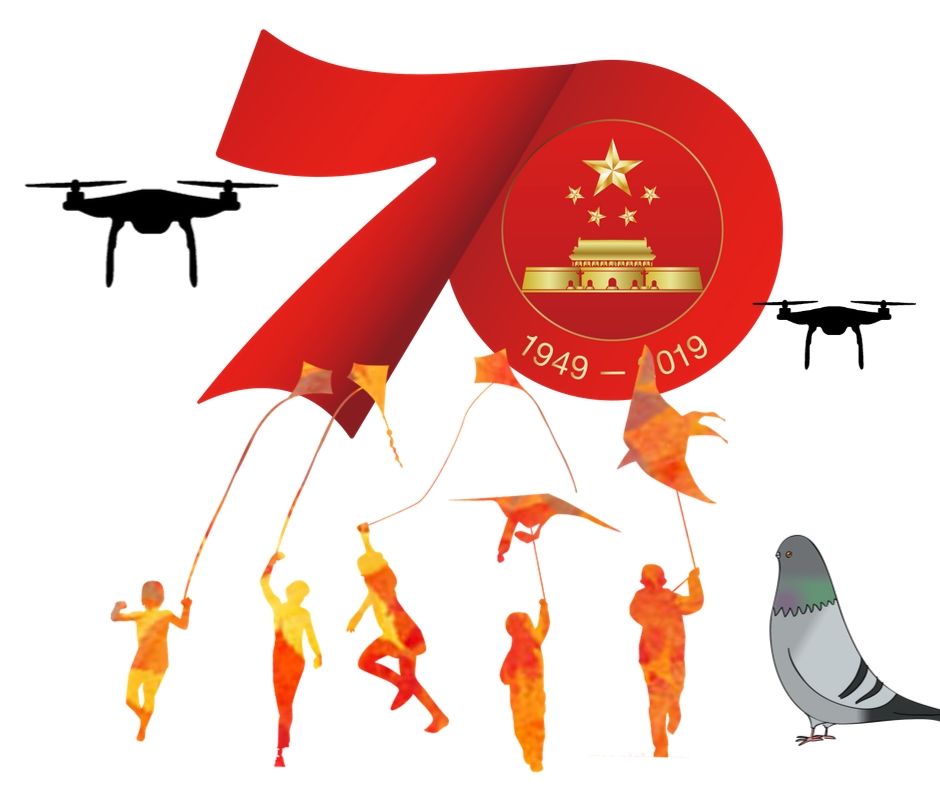 On October 1, China will hold anniversary celebrations to mark 70 years since the founding of the People’s Republic of China. There will be a massive military parade through the centre of Beijing, and a speech by the Communist Party’s leader, President Xi Jinping.

To ensure the anniversary celebrations in China run smoothly, Beijing authorities have placed restrictions on a wide range of items including; drones, balloons, kites, pigeons, fireworks, liquor and soap operas.

National Day in China is celebrated on October 1 each year and every 10 years the founding of the People’s Republic of China is marked with a huge military parade in Beijing. This year’s procession along the Street of Eternal Peace and through Tiananmen Square is set to be the largest yet. The Chinese military is expected to showcase some of its most sophiscated weaponry, to encourage patriotism at home and send a message to the world that China is once again a force to be reckoned with.

With the stakes so high, authorities are taking absolutely no chances and for the past month the capital has been on high alert with stringent security measures around the city. In seven of Beijing’s central districts airborne activities such as flying kites, flying drones, releasing balloons, releasing lanterns and pigeon racing have been banned.

There has also been a clamp down on some bars and nightclubs to restrict the sale of alcohol. In some cities government officials have been warned not to consume alcohol in the run-up to the parade.

Shopping malls in Beijing are currently being patrolled by bomb-sniffing dogs, while shops, buildings and hotels along the parade route have seen X-ray machines and metal detectors installed to ensure the route remains safe. Access to many of the buildings overlooking the parade route is being restricted and residents are being required to vacate their premises before the actual parade begins. During the evenings, some streets and subway stations in Beijing have been closed so the military can rehearse for the huge parade.

‘The authorities have placed my entire neighborhood, not far from Tiananmen Square and the Forbidden City, on lockdown. Roads are blocked, and the internet has slowed to a crawl. Security officers pat me down every time I enter my apartment building, morning and night.’

‘The police have imposed curfews, requiring residents to return to their homes by 5 p.m., and lock windows and close curtains by 8. Police officers sleep in the hallways of apartment buildings to ensure the rules are followed.’

The sale of gasoline is also being affected by the upcoming celebration with motorists prohibited from filling up their vehicles by themselves until October 7. Dangerous construction work and the sale of hazardous chemicals and fireworks are also being restricted until after the national holiday.

On October 1, 30,000 pre-selected individuals, including “outstanding Party members, model civil servants and workers” will get to watch the parade and hear the speech by Party leader Xi Jinping at Tiananmen Square.

For those who are not fortunate enough to be invited, the anniversary celebrations will be streamed on live television, and to ensure everyone in China can tune in, authorities are distributing 620,000 TV sets to poor households.

The 32-inch LCD color TVs will be distributed to families in “old revolutionary bases” and poor areas across the country.

Unfortunately for those families receiving free televisions, they won’t be able to use them to watch any of the country’s popular soap operas since the country’s censors, the National Radio and Television Administration , have placed a ban on ‘idol dramas’ until after National Day.

“TV stations should put emphasis on choosing shows … and not broadcast any period or ‘idol dramas’ that are too entertaining. [They must also] make sure the shows broadcast are appropriate for the whole environment during this period.”

And so for the past two months Chinese television channels have had to cease broadcasting period dramas and soap opears and instead broadcast from a list of 86 “patriotic” shows.

As such, some of country’s most popular costume dramas, including ‘The Untamed’ and ‘The Longest Day In Changan’, were forced to air in rapid succession to ensure they were wrapped up before the ban came into place.

According to a Sina TV poll, the distruption to the country’s soap opears is not popular with 39% of the television viewers surveyed saying they were unhappy with the media restrictions.

The 70th Anniversary celebrations will be followed by a 7-day holiday known as ‘Golden Week’, during which time millions of Chinese will set off on vacation.

Golden Week is the longest public holiday in China after Chinese New Year and many popular tourist destinations will be crowded at this time. If you are travelling during this period expect to see big crowds.

As for those who wish to avoid the crowds and stay home, the good news is that the ban on soap operas, kite flying and pigeon racing should be over, so there’ll be plenty to keep you entertained!