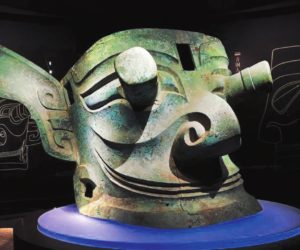 An awe-inspiring archaeological find at a site in China’s Sichuan province, is forcing historians to rewrite the history of Chinese civilization. The recently unveiled discoveries of at the Sanxingdui site date from 1,200 B.C.. The treasures discovered indicate that the mysterious Shu Kingdom, which ruled the upper reaches of the Yangtze River until 316 BC, had advanced bronze crafting skills and was a highly developed civilisation.  […]

Posted: May 22, 2021
Under: China, Chinese Culture
Read Me Leave comment