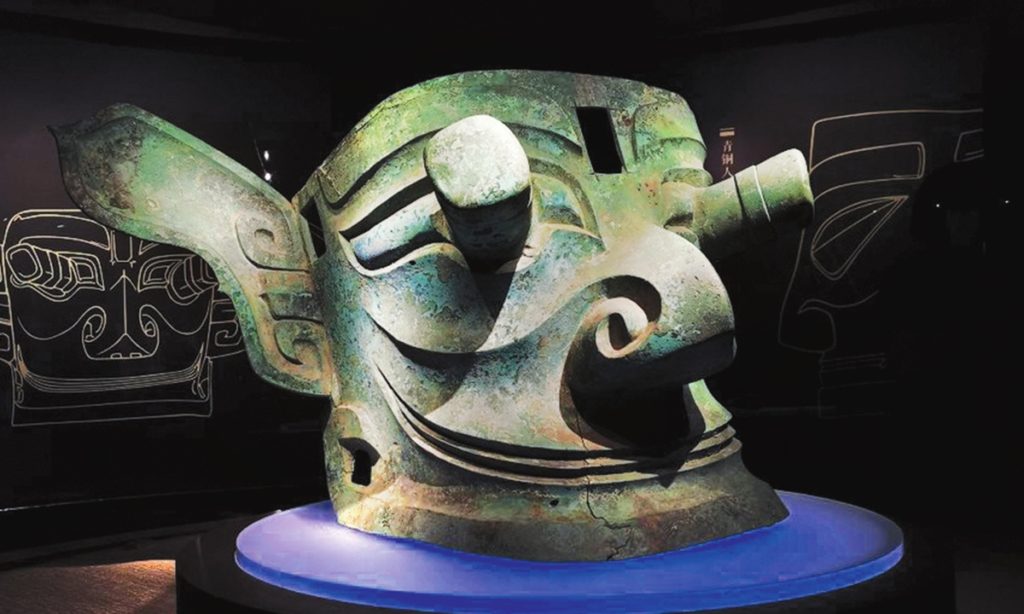 An awe-inspiring archaeological find at a site in China’s Sichuan province, is forcing historians to rewrite the history of Chinese civilization. The recently unveiled discoveries of at the Sanxingdui site date from 1,200 B.C.. The treasures discovered indicate that the mysterious Shu Kingdom, which ruled the upper reaches of the Yangtze River until 316 BC, had advanced bronze crafting skills and was a highly developed civilisation.

Sanxingdui, the name given to the site where these fascinating antiquities were found, is a 12 square-kilometre site situated outside the provincial capital of Chengdu. The site was originally discovered in the 1920s. These most recent finds are the result of excavation work which started in November 2019.

The recently revealed archaeological artifacts include more than 500 different objects, all over 3,000 years old, including ornate gold, bronze, jade, ivory, pottery and remnants of silk.

The ivory found at the site included large tusks which were often used in early Asian societies as tributes from smaller kingdoms. This suggested the Sanxingdui leaders were feared and respected by neighbouring kingdoms.

The discovery of silk fibers at the site points to a developed civilization and an important trade hub. Tang Fei, Head of the excavation team and chief of the Sichuan Provincial Cultural Relics and Archaeology Research Institute, explained that the discovery of silk indicates that the kingdom “was one of the important origins of silk in ancient China.”

As well as clear signs of skilled craftwork, what is striking about the recent discoveries is that astetics of the sculptures are uniquely distinct from other contemporary East Asian bronzes, and unlike anything ever found in China before. What makes this site even more enigmatic is that researchers and government officials claim that there is no mention of this civilization in any historical document.

By far the most outstanding items in this discovery were dozens of large masks with exaggerated almond-shaped eyes, prominent pointed noses, large elf-like ears and square faces. The collection of masks more closely resemble popular images of aliens than they reflect the people of East Asian.

The largest of the masks is 1.32 meters in width and 0.72 meters in height, making it the largest bronze mask ever found. The size and intricacy of the masks confirm the remarkably advanced bronze casting technology of the Shu Kingdom.

The three largest masks have giant ears, protruding eyes, and one has an ornate trunk. The other-worldly aspect of the Sanxingdui masks has inspired memes on social media, as well as conspiracy theories about aliens being in contact with ancient cultures.

As well as the bronze masks, fragments of an ornate gold mask were also found. The mask is estimated to be 84% gold and weighs about 280 grams (9.88 oz.). Experts predict the complete mask would have weighed over 500 grams and could have been ‘the heaviest golden object from that time period.’ This pièce de résistance is now on display in the Sanxingdui museum.

The discovery of a 3,000 year old advanced society in China’s  southern Sichuan province is forcing scholars to reexamine the history of Chinese civilization. Previously Chinese historiography had assumed there was a single center of civilization in northern China which developed during the Shang Dynasty.

The discovery of the previously unknown kingdom in Sichuan province, requires a shift in understanding to recognise the existence of multiple regional traditions. The advanced civilisation alongside the evidence of trading and tributes from other kingdoms suggests the history of Chinese civilisation is far more varied and complex than previously understood. More research by archeologists and historians will help to provide a clearer understanding of China’s rich history.

The Sanxingdui was originally discovered by a local farmer in the 1920s and since then over 50,000 artifacts have been unearthed. During China’s turbulent cultural revolution, the site was largely neglected, until a major breakthrough in 1986.

In 1986 two ceremonial pits at the site were discovered and over 1,000  found. During that excavation, the stand out discovery was a giant 3.95-meter bronze “tree of life” which is still on display at the Sanxingdui Museum.

As Sichuan province has turned into a focal point for the study of ancient civilizations, the excavation team has employed increasingly advanced technologies. Archeological cabins have been erected over the pits to control temperature and humidity levels and minimize damage to the delicate artifacts.

This excavation team has also enabled the public to watch the excavation work through live streaming. During the recent excavation work, millions of viewers have followed the archeologist discoveries in real time.

These discoveries are predicted to provide a tourism boost to the already popular city of Chengdu. As Sixth Tone reported, “Many museums around Chengdu are going to benefit from all the public attention from the new Sanxingdui discovery.”

The discovery of these artifacts from the Sanxingdui civilization opens a new chapter in China’s history, but the lack of written records and ancient texts means the Shu Kingdom is an enigma, for now. The unusual discoveries, such as the bronze masks and the giant Tree of Life, are so different from previously known civilizations, and the purpose of these objects remains to be discovered. As such, the symbolism, beliefs and mysteries of the Shu Kingdom look set to occupy the attention of archaeologists and historians for many years to come.

Sanxingdui is currently on the UNESCO World Heritage Sites ‘tentative list’. It is hoped these incredibly 3,000 year old discoveries will encourage UNESCO to recognise the importance of this site soon, and the Sanxingdui civilization will attract the global attention this fascination culture deserves.