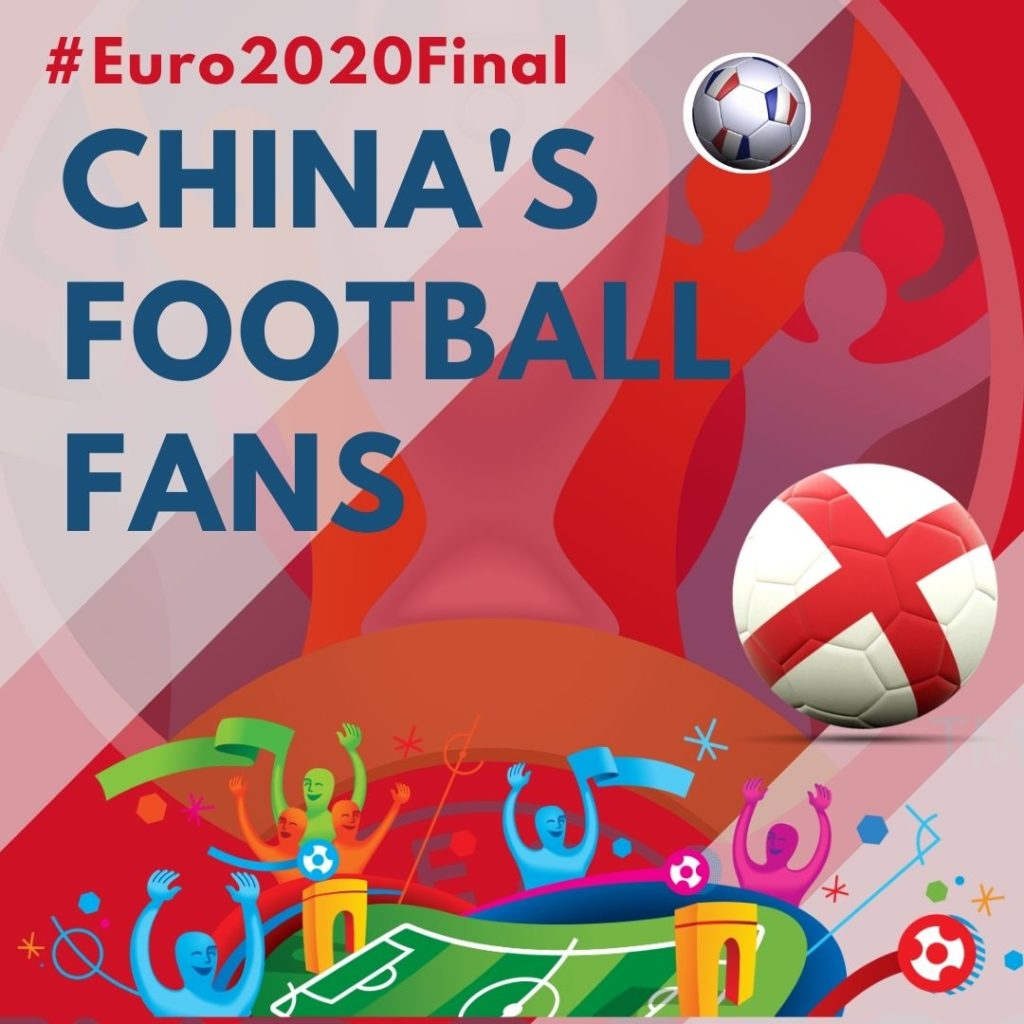 The Euro 2020 football championship reaches its zenith this weekend with the final between England and Italy. After a one year delay to this competition, fans around the world have jubilantly celebrated the return of international football played in front of thousands of spectators. China’s football fans have been particularly excited to celebrate the Euro Football Championship and analyst expect over 50 million Chinese fans to watch the final on Sunday 11th July.

One challenge that Chinese football fans face when following competitions in Europe is the time differences between the European countries and China. All of the knockout games have been held after midnight in China. However, these late nights do not deter China’s enthusiastic football fans. Millions of Chinese fans have tuned in to watch these matched and there have been more than five million Euro 2020 posts on the Chinese social media site Weibo.

The most popular international teams in China are Spain, France, Germany, Italy and England. A final bringing England and Italy together will see strong support for both teams. Looking at Chinese social media, it’s clear that many fans expect Italy to succeed in this final as they have done so many times in the past. England’s failure in past decades to reach a final, despite star-studded teams, has led Chinese fans to call England, the “Chinese team of Europe!”

For over a decade now, Europe’s top teams have made every effort to visit China during the summer break to connect with China’s football fans. These long journeys are often bemoaned by club managers, but with so many fans across the region, it is easy to understand why clubs make these trips to Asia.

According to Statista.Com, Real Madrid is the most popular European football club in China. Real Madrid has about 127 million fans in China, followed by Manchester United and Inter Milan which also have over 100 million Chinese fans. Just to put those numbers into perspective, the number of fans these teams have in China outnumber the populations of the countries these team are located in.

Europe’s top teams have more fans in China, than they have in their home country!

Anyone watching the games at Euro 2020 Championship will have noticed the high proportion of Chinese sponsorship boardings, often with message written entirely in Chinese.

At the Euro 2016 Championship, China’s electronic giant Hisense became one of UEFA’s top sponsors. According to a report by Ipsos Connect, Hisense’s brand awareness sharply in Britain, Germany, France, Italy and Spain – countries that host major football leagues in Europe. ShuShu Chen, a lecturer in sport policy and management at the University of Birmingham, confirms these finding, explaining that HiSense did report a rise in sales after its sponsorship of the 2016 tournament.

TikTok, the Chinese developed social media application which now has over one billion active users, has been promoting Euro 2020 on its platform, including branded augmented reality effects. Shortly before the competition, UEFA launched its own official tournament account and that account is now followed by 4.2 million people.

China’s passion for football is slowly translating into growth and development in its own domestic football league.

Back in 2014, football was added to the national school curriculum. Grassroots clubs and youth facilities are expanding and future generations of Chinese footballers will benefit from these policies and initiatives.

In 2016 the Chinese Super League (CSL) launched. Backed by wealthy investors, Chinese clubs set about signing world class players including the Brazilian star Oscar, who joined Shanghai Port FC from Chelsea for $80m. A numer of other high profile players were signed by Chinese clubs but not all have integrated successfully. Furthermore, the CSL has since announced a salary cap for its players in order to “curb money football”,

There are still a number of top European players in the CSL. Chinese fans watching the Euro 2020 Championship have been able to follow three players they are familiar with – Marko Arnautovic from Austria who, like Oscar, plays for Shanghai Port, Swedish defender Marcus Danielson who plays for Dalian Pro and Swedish midfielder Gustav Svensson who plays for Guangzhou City FC.

In the coming years, young players are expected to raise the standards of footballing in China, and the government has set ambitious targets to become a Football Superpower by 2050.